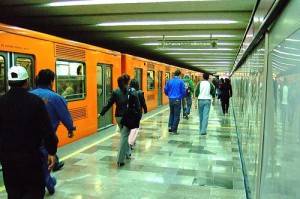 Mexico City and Cancun are two major entry points into the country. Also, many travelers cross the border from the USA and choose to explore Mexico by car. Once you arrive in the country, you can fly between the cities, take the bus, or explore Mexico at your own pace in a rental car .

Benito Juárez International Airport (MEX) is the busiest airport in Mexico and is hub for quite a lot of domestic airlines. It receives direct flights from North America, Central America, Europe, South America and the Caribbean.

Cancun Airport International (CUN) is one of the busiest airports in the Caribbean and a gateway into the Mayan vestiges and the Mayan Riviera. It receives mostly flights from North America and Europe.

Getting around in Mexico

Being quite a large country, it does take a while to figure out how to navigate between the cities and within a city. Also, it’s important to know how to get from the airport to the hotel or hostel you are staying at.

From the Airport to the City Center

In Cancun, there are two companies which provide transfer from the airport to the city center and the Riviera Maya.

From One City to Another

Renting a car is a good option if you want to explore the country or a particular region. It can get expensive if you need the car for a long period of time, but the longer you rent and the smaller the car, the better your rate will be.

There are many bus lines in Mexico which offer transport between the cities. You can choose between first class or luxury buses and cheaper options, excellent for backpackers.

Unfortunately, most of the long-distance trains in Mexico have been pulled out and now there are only a handful of scenic trains available.

Mexico has an extensive network of modern airports. All major cities are linked by air and there are plenty of domestic airlines to choose from.

Mexico City has several public transport alternatives. The metro is reliable and is a fast way to get around. There are buses and trolleybuses available, as well. And if you have a bigger budget, you can take the taxi.

In Cancun you can take the bus or the taxi. Buses are cheap and frequent.