Things to do in Mexico City

As the largest city in Mexico, Mexico City has a multitude of things to offer and sites to see. It is full of eye opening architecture and contains a rich history but the city is also home to some of the best places to shop and go out at night.

When planning a trip to Mexico City, be sure to research the sites that interest you, but don’t be afraid to venture off course. There is so much activity in this city that you are bound to find something exciting along the way! 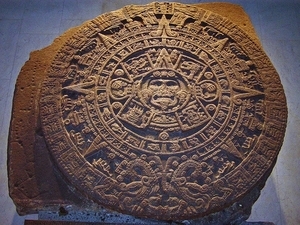 Although there are probably hundreds of museums in Mexico City, there are two that you just can’t miss. First on the list is the Museo Nacional de Antropología. With 12 huge exhibition halls, this museum is home to the country’s best archeological collection and highlights fascinating pre-Hispanic cultures. Although this collection may seem overwhelming, try to focus on the cultures you are interested in or the type of artifacts that interest you.

If you are more interested in art, the Palacio Nacional is a must-see. Located downtown, the palace houses 18 years’ worth of Diego Rivera murals highlighting Mexican history and culture. These spectacular murals demonstrate pre-Hispanic life and the blending of indigenous and Spanish blood and cultures through the use of vivid colors and images.

Although you might imagine Mexico City as a highly polluted, over-populated nightmare, it was once home to the great Aztec civilization of Tenochtitlán. Remains of this civilization continue to lie among
the traffic and busy streets of Mexico City. 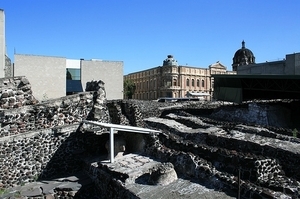 The Templo Mayor, or great pyramid of Tenochtitlán, is a great opportunity to see the pyramid’s building stages and temples. The museum demonstrates Aztec life in this city, which was the site for dedications, human sacrifice, coronations and other important religious and civic events.

Another important archeological site is Tlatelolco, established in 1338 by a group who left Tenochtitlán to create their own city. Here you can see reconstructed ruins of this civilization in the form of a temple. The Iglesia de Santiago Tlatelolco was built using stones from dismantled pyramids to honor the gods Tláloc and Huitzilopochtli. 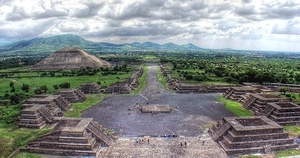 Although about an hour away from Mexico City, Teotihuacán is an essential tourist destination highlighting the splendors of Mexica (Aztec) civilization in the form of two majestic pyramids. At the far end of the Avenue of the Dead is the Pyramid of the Moon, a funerary monument with tombs dating back to the first century A.D. Across the avenue, you can make the journey up the Pyramid of the Sun, which is the third largest pyramid in the world.

Although The Pyramid of the Sun has more than twice as many steps as the Pyramid of the Moon, it is slightly easier to climb because the steps are shorter. Although it may look like an impossible task to some, it is well worth it to make it to the top. Be sure to bring a lot of water and take frequent breaks to catch your breath as you climb! The view at the top of each of these pyramids is a rewarding, unforgettable sight. 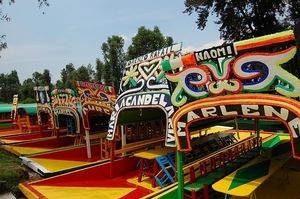 Xochilmilco is about 15 miles away from downtown Mexico City and is the last place you can see the remains of the system of canals and garden plots that once lined Lake Texcoco (the lake surrounding the Aztec civilization of Tenochtitlán). Here, you can ride on the colorful boats decorated with flowers and tour the canals. Don’t miss the Parque Nacional Xochimilco, an ecological reserve that hosts beautiful botanical gardens.

While Mexico City has an abundant archeological and artistic realm of sites to see, there are also some spectacular places to shop and things to see and do downtown. The zócalo, or central plaza, was built from the rubble of Tenochtitlán and is now a gathering place and site to watch traditional Aztec dances and other forms of entertainment.

The Zona Rosa is a great place to walk around or go shopping and is located in the Chapultepec area of the city. Here you will find the best variety of high-end boutiques and brand name stores from around the world.

Coyoacan is a traditional colonial neighborhood where you will find colorful boutiques and handicraft stores where the artisans sell what they make themselves. Don’t forget to try your hand at bargaining when you want to make a purchase!

La Ciudadela is a craftwork center home to the most important handicraft exhibition in Mexico. Here you can find handicrafts from a variety of different ethnic groups while wandering among more than 300 workshops and stands.

If you prefer big time malls instead of markets or shopping districts, the Santa Fe Mall should be first on your list. It is currently the larges shopping center in Latin America and features several restaurants, a movie theater, entertainment attractions and popular department stores.

If Mexico City is hopping during the day, it doesn’t seem to slow down any at night. Night clubs and discotheques are packed on the weekends and casual bars and restaurants busy every night of the week. Here is a sample of what night life in Mexico City hast to offer:

Black Out: Located in the Zona Rosa, this bar has an elite atmosphere but charges no cover and has reasonable prices.

Bulldog Café: This bar is home to some of the best rock and roll and is a great place to find a concert.

Circus: This bar offers a nice selection of dance pop music, all held under a circus tent. An upscale crowd can be found there, along with live bands.

El Imperial: Known for being the best music scene of Mexico City, this bar is situated in a renovated mansion.

Must: Here you can find the beautiful people of Mexico City dancing to electronic beats and pop music.