The Sombrero: Inspiration for the Cowboy Hat? 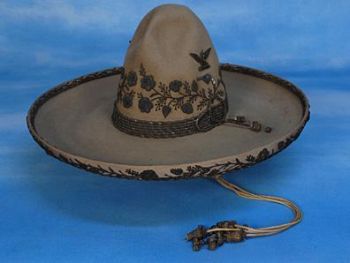 Much like the beret for the French, the sombrero has long been an iconic image associated with Mexico. Sombreros have a high pointed crown and a very wide brim, which is usually upturned at the edges and are made of straw or felt. The name of the hat is derived from the Spanish word sombra, meaning “shade” or “shadow” and the hats first appeared in Mexico during the 15th century. Traditionally, the wide brimmed hats were worn by both rich land owning Mexican ranchers and by poorer peasants who worked the land. In both cases, the wide brim helped to protect the wearer from the harsh sun typical in many parts of Mexico.

Traditionally, Mexican gentleman wore sombreros made from tan, white or gray felt that were intricately embroidered and decorated, while peasants and farm workers wore far simpler, straw versions. Today the sombrero is rarely seen in urban Mexican settings. Sombreros are in fact part of a folkloric outfit worn in certain festivities across Mexico and is frequently worn during Mexican celebration.

While most think of sombreros as cheesy décor on the walls of Mexican restaurants, the shape of a chip and dip platter or and as a favorite accessory of frat boys who use Cinco de Mayo as an excuse to drink copious amounts of tequila and Mexican beer, the sombrero was actually the inspiration for the very American cowboy hat. In fact, the concept of a broad-brimmed hat with a high crown worn by a man on horseback came primarily from the tradition of the Mexican vaquero wearing a sombrero. The sombrero was adopted by ranchers and frontiersman in the American southwest, who found the wide brim practical for hot southwestern days. The shape of the original sombrero morphed over the years, giving birth to the modern American cowboy hat, but the origins of this cowboy staple still lay south of the border.