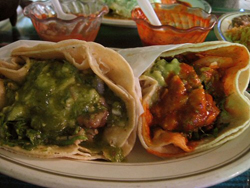 One of the most popular Mexican foods that can be found in restaurants all over the world is Taco. As in the case with all traditional foods, you won’t taste a real taco unless you visit Mexico.

In Spanish, “taco” means “light snack” but the dish itself has its origins in pre-Hispanic times when Aztecs used corn tortillas in the same way Europeans used bread.

The taco is popular and eaten all over Mexico but it’s prepared slightly differently in each region. The tacos made in northern Mexico are called “tacos de carne asad” or “tacos of grilled meat”. Another difference is given by the type of tortilla used – that pita bread also used to make the Greek gyros but thinner and made from wheat (in the north). In other parts of the country a corn tortilla is used.

The main accompaniment for taco is salsa. The basic ingredient used in any salsa is the dried and/or fresh chilli. Fresh vegetables such as radishes or cucumbers are also added to the tacos. Lime is squeezed on pretty much anything in Mexico and tacos make no exception.

Eating tacos on the street

Mexico is notorious for giving food poisoning to almost every traveler. This is not due to the preparation of the food but because the tap water is not pure in most places. However, purified water and bottled water is available.

One of the best parts of eating real tacos in Mexico is doing it in the street. But you have to be careful not to end up stuck in the toilet the next days.

Here are few tips to help you choose where to eat your Mexican tacos:

How to make Mexican Salsa

A real Mexican Salsa can be easily made with ingredients you can pick up at any supermarket or farmers market. To make Salsa bandera you need to mix the following ingredients (do not use a blender; you don’t need a paste!):

How to make Mexican Tacos

To make tacos you need the salsa you just prepared from the recipe above, 6 corn tortillas, grilled meat (about ¾ lb of any meat you like), sliced radishes and sliced cucumbers. Cut the grilled meat into bite-size pieces and put a serving on the tortilla. Add salsa and the veggies.