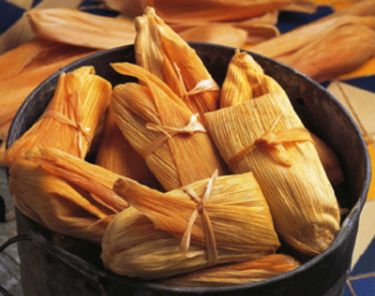 For those of you who have read my previous posts on the delights of mole and tacos, it will come as no surprise that one of my very favorite parts of traveling is eating. Not only do you get to sample new and exciting foods, but enjoying regional cuisine very much opens a window into local culture. Since food and eating is such an integral part of any culture, it is no wonder that in order to truly experience a place, you are going to have to try the local cuisine. Fortunately, when traveling in Mexico, eating your way through your travels is not only a cultural experience, but also a delicious one. Although most Americans are at least somewhat familiar with the Tex-Mex style Mexican food, what you find on the menu south of the border will vary from what’s found north of the border. However, with lots of fresh peppers, tortillas, cheeses, meats and delicious sauces, no hungry traveler will starve on a trip.

One of my favorite Mexican foods is the tamale. A traditional food that varies from region to region, the most delicious tamales are not necessarily those you most widely find outside of Mexico.

Tamales are a traditional indigenous food from Mexico that are made from masa (cornmeal dough), usually containing meat that’s steamed in either a corn husk, banana or corn leaf. The tamale (tamal in Spanish) can be traced back to as early as 5000 BC, when they were eaten as a nutritious and portable food by Aztec and Incan warriors. The leaves in which the tamales were steamed in not only sealed in the moisture, but also provided perfect covering that made the food easy to transport.

Today, tamales are a widely eaten and enjoyed food throughout Latin America and in the United States. However, although the North Mexican style tamale is most known and popular in the U.S., there are actually a wide variety of tamales that originate from all over Mexico.

Tamales of Northern Mexico: These two-finger wide and 5 inch long, corn husk wrapped tamales are best known in the United States and are usually filled with a thin sliver of meat inside .

Tamales Chiapanecos: These banana leaf wrapped tamales are typically filled with spiced pork, chicken, beef and tend to be smaller in size and more square shaped than the tamales of Northern Mexico. They also tend to have a greater meat to corn meal ratio.

Tamales of Oaxaca: The hand-wide, flattish tamale of this southern region of Mexico is usually steamed in a banana leaf and contains chicken and mole sauce in the center. These are some of my favorites. 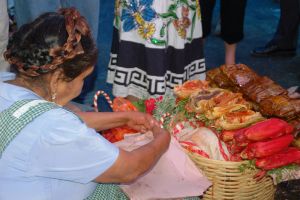 Tamales of the Yucatan: Also called brazo de reina (arms of the queen), these large, long tamales are made with chopped chaya leaves mixed in with the masa, and is then filled with hard-boiled egg, roasted and ground melon seeds (called pepito blanco), which lends a nutty flavor. These tamales are usually served cut open and with a mild red sauce on top.

Tamales of Campeche: The colado tamale is large in size, steamed in a banana leaf and is usually filled with chicken, chopped onion and tomato and a touch of epazote (a Mexican leaf vegetable with a fennel-like flavor).

Tamales of Michoacan: These triangular shaped tamales called corudas are steamed in fresh, green corn leaves and are usually filled with pork and drizzled with sour cream and/or a red chile sauce.

Tamales of Veracruz: Veracruz is famous for its zacahuil tamale, which is steamed in a banana leaf and stuffed with roasted pork leg and is doused in a tasty chili and tomato sauce and cooked in an earthen pit.

Tamale Muk bil Pollo: These huge tamales are a specialty served during the Days of the Dead (November 1-2) and are made using achiote-flavored masa filled with chicken, pork or turkey and are covered in a sauce created from garlic, oregano, onion, chilies, tomato and vinegar.

Tamales de frijol: Quite simply, these are bean filled tamales and are often found in Temoac in eastern Mexico.

Tamale Uchepo: A long, slender tamale are usually sweetened with strawberries or other fruit and stuffed with pork and pabalno peepers.

Remember!
A good rule of thumb when it comes to finding the best tamales (or any other type of Mexican food for that matter) is to eat how the locals eat. The beat tamales are usually found in street markets are being sold by women in town squares etc. These are freshest, cheapest and most delicious tamales you’ll find!