Support Mexico at the World Cup 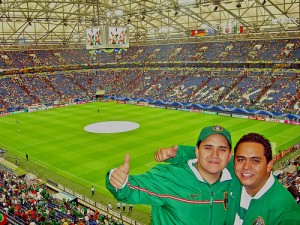 Football (or futbol) is Mexico’s most beloved sport, and every four years, Mexican fans join the rest of the world in watching the biggest event in sports, the World Cup. This summer, the World Cup is taking place in South Africa, and millions of Mexicans and Mexico supporters will be watching, either from a seat in the stadium, at the local bar, or on the TV at home.

Mexico has a great history in the World Cup, even though they are not thought of as one of the footballing superpowers. Only four nations have advanced past the first round in each of the last four World Cups – Brazil, Germany, Italy and Mexico. That’s some very strong company. This year, they find themselves in Group A along with France, Uruguay and hosts South Africa. Taking on the host country is never an easy task, and the French will present a strong challenge as well. Uruguay has not been a strong World Cup contender in recent years, but they have won the tournament in the past, and are not to be dismissed.

So how will you support “El Tri” (the Mexican national team) in South Africa? If you can make it, there’s nothing like being there, and there’s still time to book a flight to South Africa and get your Mexico World Cup tickets. Remember to bring your scarf and flag, and rest your voice – you’ll need it!

If you won’t be able to make it to the tournament yourself, we have everything you need to keep up to date on Mexico’s World Cup right from your computer at home. You can follow all the action online at Mexico World Cup Blog, and there are accounts on Twitter and Facebook to get all the updates.

Will this be the year that El Tri ends their streak of four straight knockout round appearances, or will they advance even further, to the quarterfinals of this year’s World Cup? Watch every moment along with the Mexican fans to find out, and enjoy the greatest spectacle in world sport.