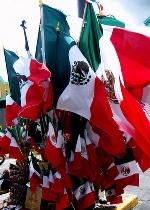 September is the most patriotic month in Mexico. September 15th is when the Independence Day is celebrated while September 16th is the day of the Grito. The country is “decorated” in red, white and green for the entire month making it a really interesting and colorful experience for anyone visiting Mexico.

September is still in the middle of the rain season and the hurricanes are still a possibility. The weather can be very hot during those celebrations but an occasional rain makes for a perfect, cooler day celebrating in nature.

Being still during the low-season it means that you can find good deals for flights to Mexico and accommodation here. Many tourists take advantage of these offers so don’t expect the cities not to be crowded. On the contrary, due to the celebrations, the crowds tend to be at their highest in September.

>>more information on Weather in Mexico

Independence Day is celebrated all over Mexico on September 15th and 16th. At 11 pm people gather in the main squares waiting for the Grito de la Independencia. It commemorates Miguel Hidalgo y Costilla’s call of independence. In 1810 he shouted “Viva Mexico!”

By far the largest celebrations take place in Mexico City’s Zocalo. The local authorities start to decorate the square in the national colors from the beginning of September. On the 15th, at 11 pm, the president goes in the central balcony of Palacio National and shouts “Viva Mexico!” The crowds answer back “Viva!”. Military parades and fireworks complete the festivities.

On this particular day, several foods are a must: pozole – a soup made of hominy and pork- and chile en nogada are among them.

Mariachi Festival is the most important event taking place in Guadalajara. It starts on August 28 and ends on September 7. Performances take place in the streets and special venues.

Festival Internacional Chihuahua takes place between September 4 and October 1 all over Mexico and comprises 450 cultural events. One of the year’s highlights is the concert performed by Placido Domingo.

Feria Nacional Zacatecas takes place in Zacatecas between September 5 and 28. It comprises amusement rides for the kids, music and theatrical performances, as well as a lot of good Mexican food.

Pamplonada takes place in Guanajuato on September 23 and is the annual festival dedicated to Saint Michael Archangel. There are parades, fireworks and concerts.

Fall Equinox, on September 21, is celebrated at Chichen Itza. The sun makes an interesting serpent appear on the steps of the pyramid.