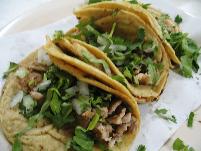 Let’s be clear from the start: real Mexican food is not Tex-Mex or the Mexican look-alike food you find stores all over the world. And it’s not a certain fast food chain food either. Nothing tastes like the food cooked from scratch and preferably by someone who has a lot of experience doing so. Of course you can try to cook: it’s both fun and rewarding.

When visiting Mexico you’ll soon realize that the best food is the real Mexican street food. Yes, there are plenty of overpriced restaurants but if you are after the real deal, check out the food stalls. While the Mexican cuisine is filled with rich and spicy dishes, you should get your stomach accustomed to them, so for the first days in Mexico try to limit yourself to less spicy dishes.

The basics of Mexican food

Without a doubt, many of you already know what the basic Mexican foods are. However, let’s see what they are all about in Mexico.

It’s been the staple Mexican food for generations. It can be made either with flour or maize and it’s often used instead of bread. Tortillas are also an important ingredient in several Mexican dishes: enchiladas, tacos and quesadillas.

Chilies are common all over the world. In general, the bigger the chili the milder the flavor (or it’s less spicy). Some are stuffed and used as main course, while others are used to spice the dishes.

The beans are very common in the Mexican cuisine. Many varieties are used. The beans are boiled and the fried. They are either used as a garnish or as a meal.

Salsa is a sauce but many associate it with the red mix of tomatoes, chili, coriander and onions. It is also served as dip or garnish.

>>check out our Salsa recipe

Made from avocado, guacamole is very common in the US but has gained a lot of territory in other parts of the world as well. No one do it better than Mexicans who mix the avocado paste with onions, chilies and cilantro. Often used as a dip, guacamole serves as garnish as well.

Simply put, they are made of a cornmeal paste – often stuffed with chicken, pork, raisins or dried fruits – wrapped in corn husks or banana leaves.

Despite having chili in the stuffing, enchiladas are often quite mild. To make enchiladas you need to stuff the tortillas with vegetables, chicken or pork, then folded. Tomato and chili sauce are added and then the dish is baked.

Another dish which uses tortillas…this time they are fried until crispy then stuffed with various fillings.

The tortillas are stuffed with cheese, then folded and grilled. Often served with beans or salad, they are just perfect for those who want to avoid the spicy dishes.

Popular and common all over the Caribbean, ceviche is also a real Mexican food. It’s made with fresh fish (or other sea food) marinated in lemon or lime juice together with onions and herbs. Always served cold and often as a side dish as well.

The dish originated in a town near the Texas border and was popular in US before it became popular in Mexico. So probably calling it a “real Mexican food” is a bit far fetched. However, nachos are very popular in Mexico and , of course, they taste totally different than their American counterparts. The traditional recipe contains only tortillas, cut into triangles and then fried, with some cheese added. Nowadays, a lot of dips are added to enhance the flavor.

A meal is not complete unless you try the real Mexican alcohol as well. Without a doubt, anyone knows about tequila and Corona.

By far the most well known and popular Mexican beer, Corona is served cold with any drink. It is refreshing and quite popular among women as well.

This spirit is very common among tourists especially in the form of margarita (mixed with lime juice and served in salt rimmed glasses). Mezcal is the “raw” version of tequila and the one with the worm inside. Traditionally, the worm should be eaten when the bottle is finished.

>>Make sure to also read about the Mexican Food Terminology