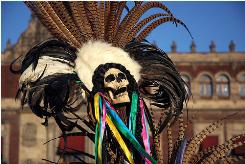 October marks the last month of the rainy season which means that the prices are still low and the crowds are still not here, but the weather changes fast from sunny to rainy that it can mess your plans a bit more than you expected. However, October is a lovely month to do some sightseeing in the cities, where the rain actually cools down the atmosphere without the risk of being confided in the hotel. Also, the month is filled with festivals and events which are interesting for those looking to explore the Mexican culture.

October is the last month of the rainy season, so the risk of tropical storms and hurricanes is still high. Due to the possible storms the weather changes quite rapidly and the forecasts aren’t always accurate (it’s hard to predicate such rapid changes). Although the rain can spoil your vacation, it also cools down the temperatures, which means October is a good month to go sightseeing.

>>more information on Weather in Mexico

In Baja California, between September 26 and October 19, you can attend the Fiestas de Sol, an annual festival with concerts, parades and fun rides, all celebrating the founding of Mexicali.

Between October 3 and November 3, Guadalajara is home to Octoberfest, which includes concerts, cultural exhibitions, food and dances. Visitors and performers come here from all over the world. Each year has a theme and in 2008 they have chose “Fantastic Myths”.

Morelia International Film Festival is held in Morelia between October 4 and 12 which is aimed at promoting the Mexican talents. There are both open-air and theater presentations and the public is invited to learn more about this industry.

Between October 8 and 26, Guanajuato is home to Festival Internacional Cervantino, one of the main cultural events in Mexico. Festival comprises both classical and modern arts performances, including opera concerts, dance and visual arts exhibits.

Day of the Race (October 12) celebrates Columbus’ arrival in the Americas (in the US the same day is called Columbus Day).

Between October 15 and 19, Playa del Carmen hosts Riviera Maya Underground Film Festival which is a film competition, featuring short films and documentaries from filmmakers all over the world. Admission to all activities is free.

The Festival of the Skulls takes place in Aguascalientes between October 19 and November 4 and features all kinds of skulls displayed between traditional stalls with seasonal fruits and a very interesting skeleton parade.

The Days of the Dead are celebrated between October 31 and November 2. The deceased relatives are remembered and honored in a unique celebration, filled with love.

Getting to Mexico in October

The major airports in Mexico are served by plenty of international flights. Most often though, it’s cheaper to fly into the capital and then take a local flight or a bus to your destination.

There are lovely hotels and cheap hostels in the Mexican cities. All you need to do is choose one according to your budget. If you plan to visit a city right in the middle of a festival, it’s a good idea to book your accommodation in advance.