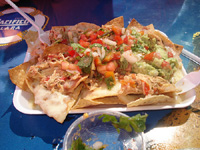 Although considered more “Tex Mex” than real Mexican cuisine, nachos are very popular in Mexico and especially among tourists. The best nachos are all about ingredients. It doesn’t matter if you use the original recipe or you add salsa and beans to the dish; what matters is the freshness of the ingredients.

Just like in the case of all Mexican dishes, the “mixes” you find the stores to help you prepare the dishes faster won’t provide the real flavor. If you want to know what nachos should taste like, either make them from scratch or take a short trip to Mexico. If you want to eat nachos on the street, just follow the crowds. The longer the line, the better the food served there.

Nachos originated in Piedras Negras, Coahuila, located just a hop over the border from Eagle Pass, Texas. Story has it that the wives of several US soldiers from the near-by Texan city were in Piedras Negras for a shopping trip. They arrived at the Victory Club restaurant right after it has closed for the day. The chef Ignacio “Nacho” Anaya didn’t want to disappoint them and invited a new dish from what he had in the restaurant: tortillas and cheese. He cut the tortillas into triangles, fried them and added cheese. He called his new dish nachos especiales. The new dish became very popular in Texas but hasn’t spread outside the state until the 1970s.

One of the most common additions to the recipe is the pinto beans (see recipe below). Other popular toppings include: ground beef, chicken, lettuce, salsa, sour cream, guacamole, jalapeno peppers or olives.

Prepare your own nachos

Thinking of throwing a Mexican cuisine party? Nachos shouldn’t be left out of the menu. This is not the original recipe but one of the most popular variations.

Here’s what you need:

Preheat your oven at 350F (180C). In a shallow baking pan, arrange a layer of tortilla chips on top of which spread the pinto beans. Sprinkle the grated cheddar cheese on top of the beans and add the sliced peppers. Toss in the oven for 10 minutes.