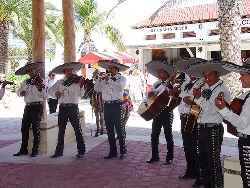 The music of Mexico features a wide range of styles heavily influenced by European and Indigenous music. Bésame Mucho, El Rey, La Bamba, Maria Bonita and Cielito Lindo are famous all over the world and many don’t even know about the Mexican roots.

The most popular Mexican genre is ranchera, played by Mariachis. This genre is a direct descendent of son jalescenses, music played in the Mexican ranches. Ranchera originated in mid-19th century, just before the revolution.

Mariachi is a group of singers who play many types of music, including ranchera. The origin of the name is not sure but many believe it comes from “mariage” (French for marriage) as the mariachis are an essential part of the traditional Mexican wedding.

A mariachi orchestra contains a guitarrón, a vihuela, a guitar, violins and trumpets. The attire comprises: a large straw sombreros with a chin strap, a hat band, a black wool blanket over the shoulder, a pair of long straight-cut muslin pants, a cotton shirt of the same material (manta), a red sash around the waist, and simple sandals.

Initially the mariachi sang mostly about romantic themes but as haciendas couldn’t afford to have their own mariachi band and let them go, the mariachi started to sing about current events and national heroes.

Where to find mariachi

Trios of mariachi are available for hire in different locations. The most popular of them are Plaza de los Mariachis in Guadalajara and Plaza Garibaldi in Mexico City. So if you want to surprise your significant other you know where to look. Just remember that the prices can be a bit high and make sure not to confuse the real mariachi with other types of buskers.

Norteño has its roots in the late XIX century, when Bohemian and Czech migrants to Northern Mexico brought different music styles with them, including the polka, which blended with the local Mexican son music.

TexMex or Tejano has its roots in the early 1900s when many people of German descent settled in Texas and influenced the music in Mexico as well. The bands incorporated the German polka and the instruments used were bass, drums, accordion, and guitar. Later, other styles have been incorporated. Currently the fans don’t make a distinction between Tejano and conjunto

Banda imitates the military bands and is another form of polka music.

Rumba comes from the black Mexican slaves in Veracruz and Yucatán. The style originated in Cuba but later became popular among the black community in Mexico.

Mexican Reggae originated in the areas close to the Caribbean Sea and was brought by Jamaican immigrants. They created their own Reggae in Spanish based on the original reggae.