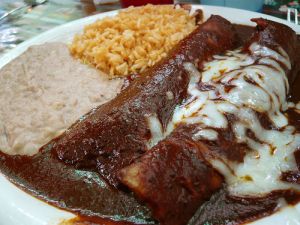 The great culinary nations of the world all seem to have their signature sauces, which always seem to make almost anything you put it on taste a whole lot better. In France, they love their béarnaise. In India, curry spices up everything from lentils to eggplant. Italians have exported their spicy, tomatoey marinara sauce all over the world. In Mexico, the national sauce is mole (pronounced Mol-AY), which perfectly blends ingredients like chocolate, chilies, garlic and onions into a soul satisfying and delicious combination that tastes divine on everything from chicken to a burrito. In fact, I love anything with mole on it almost as much as I love tacos. And I looove tacos. In fact, as discussed in a previous post, I think tacos are the world’s most perfect food. But, mole comes in at a close second. If you have not been lucky enough to try mole, you may be reading this thinking, “Savory chocolate? Yuck.” But the truth is this potent and powerful sauce masterfully blends a delightful flavor combination of sweet, spicy and salty.

Mexicans have enjoyed Mole for centuries. It is thought that the Aztecs used to eat a combination of chilies, tomato, cacao, vanilla and spices served over turkey, which they called molli, a Nahuatl word meaning mixture or sauce. The first documented mole sauce was rumored to have been brewed up in the 1600s by a nun in the state of Puebla when an archbishop unexpectedly showed up at the convent. Not knowing what sort of special dish they could cook up for their special guest, the nuns made a sauce from what they hand on hand, including peppers, spices, and even some Mexican chocolate. The result was a dark, savory sauce with a complex flavor profile that would come to tantalize an entire nation.

While American often automatically assume mole is all about chocolate, or those who didn’t know chocolate was an ingredient may turn up their noses, the truth is that the chocolate is used sparingly and gives most sauces just a hint of bittersweet undertones.

Oaxaca, in southern Mexico is most known for its moles. There are seven distinct moles found from this region which range from sweet and spicy to light and savory.

Mole Negro: This dark, chocolate mole is probably the most famous of Oaxaca’s many moles. Usually served on turkey, chicken or pork (though turkey is the favorite meat for festive occasions), this sauce blends chilies, a hint of chocolate (it may sounds gross, but it sure does taste delicious), garlic, onions, nuts and more. The result is a thick, dark sauce bursting with flavor. It’s truly delicious.

Mole Colorado: Often some sort of variation of this sauce is used as an enchilada sauce. It’s read color comes mostly from the types pf chilies used, though mole Colorado also has onions, garlic and a touch of chocolate like most other moles. It is often found on chicken and rice, though this delightfully spicy and sweet sauce tastes great on pretty much everything. Maybe I like it so much because its named after my home state, but if you are in Mexico you may just find yourself wanting to order anything accompanied with this sauce.

Mole Verde: Another personal favorite of mine, mole verde is a mixture of pumpkin seeds (pepitas), ground nuts and sesame seeds, tomatillos, green chile peppers (typically poblano or serrano), spices, soybean oils, bread or crackers (wheat flour and corn starch), sugar, and other seasonings. This condiment or sauce has a delicate flavor that is mildly spicy, depending on the seasonings added. It tastes terrific on tuekey enchiladas, but s alo found on a wide range of different dishes.

Mole Coloradito: This red mole sauce that is a variation of mole colorado is a delightful mixture of sweet and spicy with a rich and complex flavor profile. Each family and restaurant in mexico will have a slightly different version of this sauce and primarily is made with ancho or guajillo chilies as well as almonds and raisins for a touch of sweetness.

Mole Amarillo: This yellow colored mole is often served on red meats like beef and pork. It is also often found as a topping for tamales. It is made from chilies, squash, corn and sometimes also contains avocado. This sauce is totally delicious, but is not very well known in the United States. However, one bite into a tamales covered in this yellow spicy and sweet sauce and you’ll be a believer.

Mancha Manteles: This phrase translates literally as “tablecloth stain” and is a stew of meats, chilie peppers, vegetables and most importantly fruit. Simple to prepare, but with a strong flavor of chili ancho. Its ingredients are: tomato, garlic, onion, thyme, oregano, salt, pepper, cloves, almonds and chili ancho. What makes this mole special is that it is served with sautéed sliced plantains and pineapple.