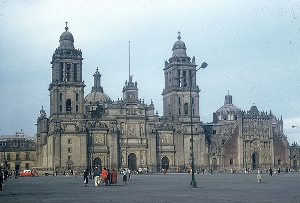 An enormous city, home to about 30 million inhabitants, Mexico City has it all: museums, galleries, parks, bullfighting, festivals, soccer matches and a vibrant nightlife. It’s a matter of choosing what you want to do.

Mexico City is located in the Valley of Mexico, in the center of Mexico. Mexico City or Ciudad de Mexico is the capital city of Mexico. Greater Mexico City incorporates 58 municipalities adjacent to Mexico City and represents the world’s largest and most populated city.

The city is located 2200 meters / 7218 feet above sea level so if you are not used to high places you might experience some difficulty breathing. But fortunately the body gets used to the altitude within few minutes.

How to get to Mexico City

After arriving, be prepared for a long series of paperwork and security checks which takes about an hour. Also, please note that you are allowed to bring free of duties: an mp3 player, a laptop, a digital camera, a camcorder, a tripod and used clothing.

From the airport to the city, you can either take secure taxi service known as Transportacion Terrestre (fare between US$ 5 and 25 depending on location) or the metro.

The climate is characterized by two seasons: dry and rainy. The dry season lasts from November to April and the rainy one from May to October. Spring months are hot, with temperatures reaching 32 C / 90 F from March to May. Summers are characterized by rain showers. Autumn and winter mornings can be really cold but the sky is amazingly clear. During January and February –the coldest months – the average temperature reaches 57 F, often accompanied by snow (mostly on the southern regions of Ajusco).

Both the Historic Centre and the floating gardens” of Xochimilco have been declared UNESCO World Heritage Sites and represent the main attractions in the city.

On the avenue Paseo de la Reforma, you will find the most recognizable icon of Mexico City: the golden Angel of Independence.

The Fine Arts Palace, a white marble theatre/museum which has gradually been sinking into the soft ground below due to its weight, is another important landmark.

Other important places to visit are: the Basilica of Our Lady of Guadalupe and the Plaza of the Three Cultures.

>>read more on the Historic Sites of Mexico City

The Chapultepec park is another important location. It houses the Castle of Chapultepec (the imperial residence), the national zoo and many museums. Among them, don’t miss visiting the National Museum of Anthropology, where the Aztec Calendar Stone is housed.

>>more information on The Chapultepec Castle and Park

Besides sightseeing, you can also go to one of the amusement parks, watch a bullfight or a soccer match. The open air markets offer a great experience and the chance to learn more about the Mexican culture (and not to mention do a lot of shopping!)

Or you can listen to the music of Mexico in Plaza Garibaldi. Nothing like dedicating a song to your significant other to end a perfect day in the city!

Mexico’s night life is vibrant. There are a lot of clubs, restaurants, pubs, bars, cafes and anything in between. The most modern venues are in Santa Fe and Reforma, while the traditional dance halls can be found in Centro and Roma. If you want to avoid the crowds, here’s a good trick: salaries are paid twice a month (14th-15th and 30th/31st) so on those dates and couple of days after the locations can get really crowded.