How to Make Tamales 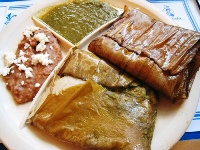 A tamale is an indigenous American dish which consists of steam-cooked corn dough with or without a filling. The most popular filings are pork and cheese but anything from fish, chicken to peanuts, raisins or dried fruits can be used. Also the tamales can be grilled instead of steam-cooked.

The dish is very popular in Mexico although it takes several hours to prepare from scratch. In all Mexican cities you can see street vendors serving them from huge, steaming, covered pots (called tamaleras). In Mexico City, the tamale is often placed inside a wheat bread roll to form a torta de tamal. If eaten for breakfast it fills you enough not to get hungry until the Mexican traditional lunch hour. In the tropical parts of the country, instead of the corn husks, banana leaves are used.

How to make your own tamale

Firstly you need to prepare the dough, for which the ingredients are:

In a bowl combine the masa harina with the water and let it sit for 20 min. Start mixing at low speed until the dough forms. Now add the salt, cumin and onion powder. In a separate bowl, mix the lard until fluffy then add it to the dough (little by little) until the dough gets to the consistency of peanut butter.

Now it’s time to make the filling. We are going to make the Yucutan feeling, for which you need:

Mix everything together and let it rest for a while so that the tastes combine.

Now prepare the corn husks or the banana leaves. To wrap the tamales, soak the corn husks in warm water. Remove them from the water and pat them dry. Now take 1 corn husk and put 1-2 tbsp of dough and spread it evenly but let enough space on the sides. Add the filling (1 tbsp) in the center of the dough. Fold the long side over slightly overlapping the other side. Wrap the extra husk on the back and then fold the broad end over the top and the narrow end over the broad one (you’ll get the “move” once you try to do it).

Steam them for 90 minutes. If you got a grill, you can also grill the tamales. You can serve them plain (as they are traditionally served) or add green chile sauce