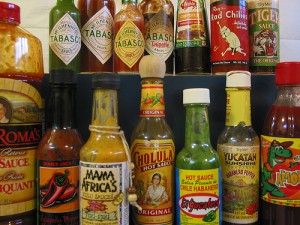 My uncle always buys 2 bottles of hot sauce—one to try and one for his collection. Lining the walls of his living room are shelves specifically built to hold his collection of hundreds (maybe even thousands) of different kinds of hot sauces. He has hot sauces with made habenero, hot sauces made with red chilies, jalapeño hot sauces, ridiculously hot hot sauces and even relatively mild hot sauces. Even the jars of his hot sauces vary widely—there are big ones and small ones, ones shaped like cowboy boots, ones wearing sombreros, tall ones, short ones, skinny ones, fat ones, you name it. There are hot sauces with pictures of flames and cactuses, and others with simple brown labels.

However, each time I examine my uncle’s impressive hot sauce collection, I am left wanting to know more about authentic and traditional Mexican hot sauces. Maybe it’s because I adore Mexican food (everyone who has read any of my stuff on here already knows I think tacos are the world’s most perfect food and that I love tamales and anything with mole), but there is a curiosity about where some of these hot sauces first came from and the different varieties of hot sauces found in Mexico.

The truth is that there are countless recipes for hot sauces. The only common ingredient among them all is the chili pepper. Chiles are then mixed with a wide range of other ingredients—including (but not limited to) vinegar, oil, alcohol, fruits and vegetable pulp.

Valentina: This sauce comes in hot and extra hot, but is known more for its citrusy taste with a spicy aftertaste than it’s hotness. It is often used on cucumbers and many varieties of fruit, such as watermelon, oranges, and pineapple, with lemon and salt added

Bufalo: This sauce comes in varieties including Chipotle, Jalapeño, and Picante Clasica (Chile Pepper). Like many Mexican sauces, Búfalo focuses on flavor more than simply on heat. It is thicker than the typical American hot sauce, but not as thick as ketchup–it is close to the consistency of many steak sauces.

Cholula: A popular brand of hot sauce coming from Jalisco, Cholula sauce blends pequin peppers, red peppers and spices. It is named after the 2,500-year-old city of Cholula, Puebla (the oldest still-inhabited city in Mexico), which is famous for its disproportionate number of churches. The name “Cholula” is derived from the Nahuatl toponym Chollollan, meaning “the place of the retreat.”

Tapatio: the most commonly found Mexican hot sauce found in he United States (although it is made in California). The hot sauce is named “Tapatío”, the name given to people from Guadalajara, Jalisco, because the company’s founders come from Guadalajara. Many Mexican restaurants feature a bottle of Tapatío on the table. It is exported to Mexico, Canada, Central America and a few countries in Europe.

Pico Pica: a good example of a hot sauce made without vinegar

Chile de Arbol: a very hot sauce, similar to a hot sauce made with cayenne pepper. Commonly used in the dish torta ahogada 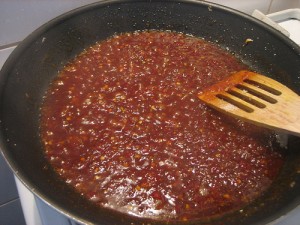 Although these sauces are mostly known in Tex-Mex style food, you will find these chili sauces smothering all kinds of different dishes in Mexico.

Red Chile Sauce: A roux is made from lard and flour. The dried ground pods of native red chilies are added. Water is added and the sauce is thickened.

Green Chile Sauce: This sauce is prepared from any fire roasted native green chili peppers. The skins are removed after the pepper has been cooked and is then diced. Onions are fried in lard and a roux is prepared. Broth and chili peppers are added to the roux and thickened. Its consistency is similar to gravy, and it is used as such. It also is used as a salsa. It is generally preferred over red chili.

Cayenne/Chile: Sauces made from these red chilies vary greatly in level of heat, but are

Habanero: Sauces made with this pepper are almost the hottest natural pepper sauces second only to the Naga Jolokia. They contain either habanero only, or a combination of habanero and other peppers.

Peri-Peri – also known as the African Birds-Eye Chili. The unique characteristic of sauces made with this pepper is the delayed sensation of heat when consumed. This allows the consumer to taste their food first, and then experience the heat.

If Try a Hot Sauce that’s too hot

Capsaicin is the chemical responsible for the “hot” taste of chilies peppers. The most effective way to relieve the burning sensation it causes are dairy products, such as milk. A protein called casein occurs in dairy products, which binds to the active agent in chilies, capsaicin, effectively making it less available to “burn” the mouth.

Water should not be used to relieve the burning as water opens the taste buds.