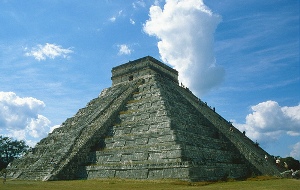 In the Maya kingdom, Chichen Itza (pronounced: chee-chehn eet-sah) was the secreted city if Itza. Its name literally means “Mouth of the well of the Itza”.

The archeological site is located at 75 miles east of Merida (Yucatan’s capital).

It’s one of the most important sites of the Maya culture. It covers about six square miles and comprises the area where once hundreds of buildings stood. Now most of them are ruins, but 30 buildings can still be seen by tourists.

The best known construction on the site is Kukulkan’s Pyramid, a 75 feet stepped pyramid built for astronomical purposes. During both the spring and autumn equinoxes, the sun bathes the western part of the pyramid’s main stairway. The light casts the shadow of a serpent, formed by seven isosceles triangles.

The site is open all year round from 9 A.M to 5 P.M.Try to visit the site either early in the morning or late in the day, as the temperatures are really high during the day.

This Mayan site is located in Chiapas state, at 13 hours by car (7 hours by air) from Cancun. Dating from the Maya Early Classic period, the site at Bonampak hasn’t been fully excavated. The site impresses the visitors with it great plaza and colorful murals found in three rooms. These show the bloody sacrifices which took place here (the captured war prisoners were sacrificed to the gods, much like we’ve seen in the movie Apocalypto).

This site is located in Quintana Roo state at 120 miles from Cancun. Only few of the structured have been uncovered. One Coba had the largest population of all Mayan cities. It’s totally worth it to climb the 120 steps to the top of the Grand Pyramid.

This site is located in Yucatan state just 9 miles north of its capital, Merida. The 10 square miles area comprises 8,000 buildings still needed to be excavated. The Temple of the Seven Dolls is a unique structure in the Maya world. At both equinoxes (spring and autumn) the rising sun shines through the portal at the top of the temple. Many people gather here for the event twice a year. The museum within the site is also worth a visit in order to understand the Mayan culture and civilization.

Ek Balam is different from the rest of the Mayan sites and has a unique feel to it. The main temple is really impressive and is one of the largest structures excavated in the Yucatan area. Evidences show that bloody sacrifices have been practiced here as well. The sculptures here are well preserved and unique. At the top of the site you can see for miles on a clear day, even as far as Coba (30 miles away).

The Mayan ruins are located around Puuc Route, which is an area comprising many sites around Uxmal, where Maya Puuc style of building can be found. Palace of the Masks is one of the most important buildings at the site. Excavations are still done at the site.

The site is located close to Uxmal and Kabah. As opposed to other Mayan sites, this one is small but filled with interesting buildings.

This archeological site is located in the in the Sian Ka´an Biosphere, which protects coastal reefs, mangroves, savannas, birds, pumas, jaguars and other animals. Among the beautiful scenery, the Mayan ruins are a pleasure to visit. Having numerous subterranean chambers, the site has a different feel than others in the Yucatan area.

This site is located in Chiapas, near the Mexican-Guatemalan border, at 2 hours flight from Cancun. Impressive in size and symbols, the site is also home to a museum which displays relics of the Maya world, jaded jewelry and many other items.

Located in Quintana Roo at only 44 miles southeast of Cancun, on Cozumel Island, this site has a very long history. San Gervasio was dedicated to the Mayan goddess Ixchel. Although restorations haven’t been done at the site, the buildings are nicely preserved. One of the most interesting buildings is the Temple of the Hands.

This site is interesting because small rocks were used, as opposed to the larger rocks used at the sites near-by. The rooms have a unique maze-style.

Once called Zama, Tulum is one of the scenically beautiful of all the Mayan archeological sites. It was one of the first Mayan cities that Spanish Conquistadors found in Mexico and was still functioning at that time. Some of the most important buildings are: the Temple of the Frescoes, the Temple of the Diving God and the Castillo pyramid. Also, one of the few images of the Mayan goddess of fertility and medicine, Ixchel, can still be found here.

>>more information on the Mayan Ruins of Tulum 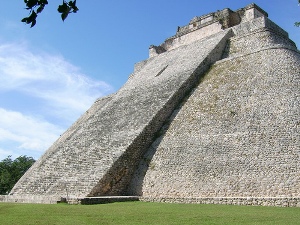 Uxmal is famous for its beauty and architecture. The most famous building is the Temple of the Magician, which has been rebuilt three times. All the buildings have been built considering astronomical, geometrical and metaphysical calculations.

The site has 86 known buildings located in a rainforest.

>>more information on touring Mayan ruins in the Yucatán