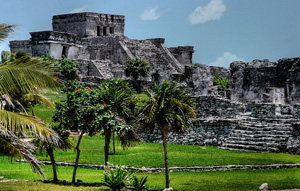 The third most visited archeological site in Mexico, Tulum is the site where the Pre-Columbian Maya walled city existed. Tulum was still inhabited when the Spanish Conquistadors arrived in Mexico.

Location and how to get to Tulum

The ruins of Tulum – one of the best-preserved coastal Maya sites – are located on cliffs along the east coast of the Yucatán Peninsula on the Caribbean Sea.

Being located on the Mayan Riviera and close to Cancun, the ruins are easily reached by tourists. If you come by bus either from Cancun or Playa del Carmen, get off at the first Tulum stop at the intersection with the access road to the ruins. From there, it’s a short mile walk to the ruins. The Zona Arqueologica is actually located before the modern town of Tulum.

When the Spanish Conquistadors arrived in Mexico in the 16h century, Tulum was still inhabited. The city’s height – also known as Zama (the City of Dawn) – was during the 13th-15th centuries.

The beach insured the merchants a place to come ashore and trade, while the highest building on the cliffs, El Castillo, acted like a lighthouse to help the navigators. The system comprised 2 torches which, when aligned, showed the way through the reef.

The Mayans relayed on commerce and never used animals of burden (because there weren’t any available). The Mayans organized trading routes all over the Caribbean (such as to today’s Honduras, Panama and Costa Rica).

The thick wall surrounds the town on three sites. It averages 7 meters thick and 5 meters high. The wall had an interior walkway and was suited for defending the city by throwing rocks off them.

Tulum is an important site for the worship of the Diving or Descending God. The archeological site of Tulum comprises 60 well preserved buildings, out of which Temple of the Frescoes and El Castillo are the most important. The bigger buildings have plaques with information in English, Spanish and Mayan (technically you won’t need guide book but if you want to really understand the history of the place you should do a bit of research before you arrive). 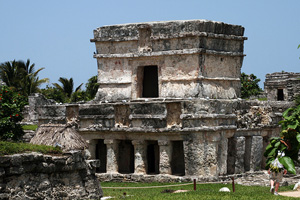 The Temple of the Frescoes (see photo right) comprises frescoes with typical Mayan motifs in the interior. The outside of the temple is decorated with some interesting statues. The colors are quite well preserved in the interior. The temple is built on three levels, symbolizing the three realms of the Mayan universe: the land of the dead, the land of living and the heaven.

El Castillo is located on the highest cliff in Tulum. It’s a temple topped with a pyramid and which also acted as lighthouse.