Itinerary for 10 Days in Mexico

If you’ve got more than a long weekend and want to do more than the over touristed Mayan Riviera and dig into the “real Mexico” then we’ve got some ideas for you! There is so much more to Mexico than the Caribbean and the resort strip along the southern tip of the Yucatan Peninsula. With ten days and a sense of adventure you’ll explore a country chock full of history, culture, religion and music that will sing to your soul. Mexico is the perfect blend of exotic and affordable, adventurous and accessible.

Plan on flying into Mexico City but flying out of Cancun. That will give you the most possible opportunity to explore widely and not have to back track. Flights going and coming from both of those major airports are affordable and reliable. In between you can rent a car, travel by the surprisingly clean and affordable motor coaches that link all of Mexico’s larger towns, or make short local flights between major cities. It’s up to you! 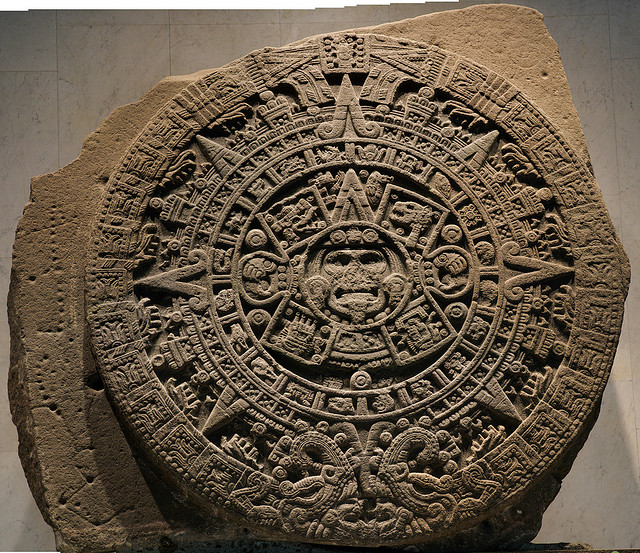 The easiest way to arrive in Mexico City is by plane, so plan to fly in to your first stop. This is one of the biggest cities in the world, so in three days you’re just going to scratch the surface! Don’t be afraid to use public transit. Mexico City’s subway is reliable and relatively clean. Do watch your pockets though, petty theft is common. Consider staying downtown, near the zocalo or in the cosmopolitan Zona Rosa. Since time is of the essence, you won’t want to spend hours on busses getting in and out of the city every day.

Start in the Zocalo, the main square, of the city. There is much to see and most of it is free. Check out the archeological dig of the old Aztec city of Tenochtitlan that is right behind the big Catholic church. If you want to visit the church remember to wear a skirt or long pants as shorts are not allowed for men or women. It’s gold gilt interior is worth a visit. Don’t miss the presidential palace, located on the same side of the zocalo as the archeological dig. You’ll have to show ID to get in (a passport is fine) but the visit is free and you’ll get a glimpse into the Mexican political system as well as a look at the breathtaking Diego Rivera murals that record the history of Mexico from before the Spanish Conquest through the 1950s. After lunch (anywhere but the McDonalds on the zocalo!) hop the subway out to the station stop with a grasshopper as it’s icon. From here it’s a short walk to Chapultepec Park where you can while away the afternoon in local style on shaded foot paths, rent a boat and row for an hour on the lake, or tour the castle turned museum that towers over the park.

Hop on a bus and make your way out to the Aztec ruins of Teotihuacan. Doubtless, this can be arranged through your hotel at a reasonable price. Pack your sense of humor as you’re certainly going to be paraded through several tourist traps on the way to the ruins and back. It’s part of your “culturally broadening experience.” The ruins at Teotihuacan are an all day affair. Laid out as a perfect replica of the known solar system at the time, with the sun at the center, the buildings are a testimony to the scientific and astronomic advancement of the Aztec world. Don’t miss the temple to Quetzalcoatl, even though it’s a bit of a hike. When you return to the city, spend the evening wandering downtown, duck in and out of the various arts and crafts markets that are tucked between buildings and pick up a few “recuerdos de Mexico” for your friends back home.

With the major historical sites of the region under your belt take part of the day and visit the Museum of Anthropology, near Chapultepec Park. Take time before you enter to sit and watch the Voladores play their flutes and spin upside down from their tall pole in the courtyard. Be sure you tip them for their show! That big stone Chac sculpture just outside the entrance? He’s the rain god. It is said that when they moved that stone to that spot it started raining and didn’t stop for three days. Inside this museum you’ll find the anthropological history of Mexico. It’s the best museum in the country and you’ll see things here that have been brought from all over the country and from every indigenous group that has contributed to Mexico’s cultural diversity. After the museum, if you still have time and energy, make your way over to the floating gardens. Check your guidebook for current days and times, try to catch it on a night when it’s all lit up! 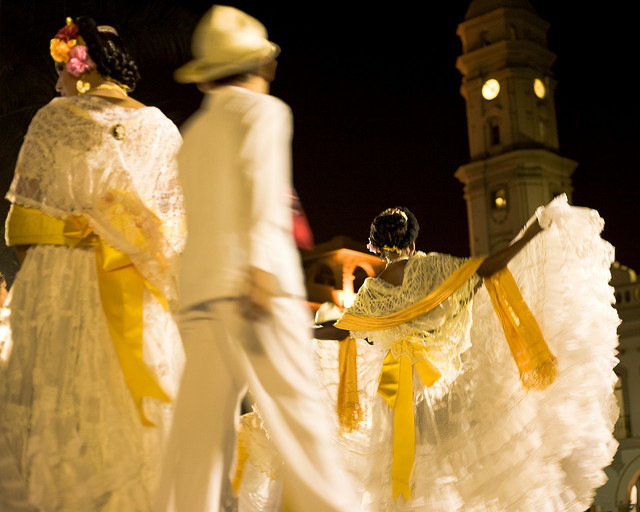 From Mexico City, Veracruz is an easy 5-6 hour bus ride over good roads and the scenery is beautiful. You’ll see the “real Mexico” from your seat on the bus. Get an early start so you don’t waste your whole day on the road! Alternately, there are daily flights between Mexico City and Veracruz that take a fraction of the time.

Quick search for hotels in Veracruz:

You’ll have arrived off the bus hot and tired so check into a hotel or hostel downtown and then make straight for the Malecon, on the waterfront to get a look at Mexico’s oldest and largest port. Buy yourself an ice cream at Guero! Guero! Guero! and find yourself a hole in the wall restaurant to order “huachinango a la Veracruzana,” red snapper cooked the traditional Veracruz way. Around seven or eight in the evening, make your way to the zocalo, just like the locals do. Watch or join in the Danzon, a beautiful evening of slow, sexy, tropical dancing kept alive nightly by the residents of the city. People show up, from babies to grandparents, dressed in white to dance. It is not to be missed.

Spend your second day soaking up the culture of Veracruz. It’s not a highly touristed region of Mexico, so you’re more likely to see Mexican families on holiday than you are foreigners. Spend a couple of hours at the Aquarium and take a long walk along the waterfront. Take some time to shop for silver while you’re in town. The full name of this city was “Villa Rica de Vera Cruz,” the rich city of the true cross and the “rich” part referred to the silver that was mined and exported in massive quantities in the 17th and 18th centuries.

Have a good dinner and hop the night bus between Veracruz and Villahermosa, it’s about a 6 hour ride. In the morning you’ll catch the bus from Villahermosa to Palenque, another 2 hours of lush scenery! 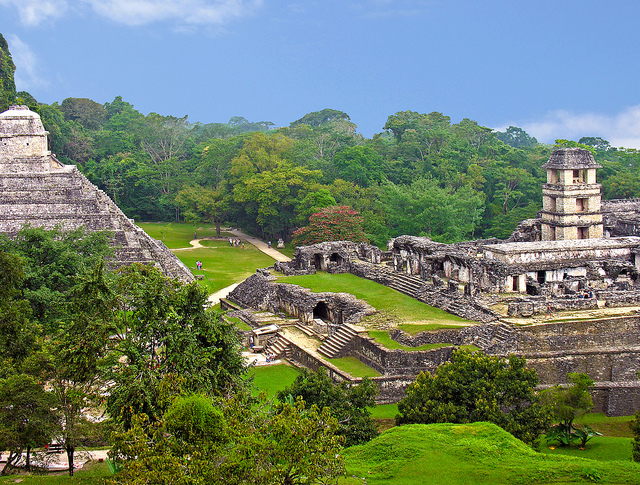 You’ll arrive in Palenque by breakfast time. Any of the desayuno cafes downtown near the bus station will do! Order yourself some huevos revueltos with beans and tortillas on the side and you’ll be fortified for the day. Buses run out to the ruin site, or you can hire a cab. Get an early start before the heat of the day makes the jungle a sweaty place to be! Palenque is a very unique archeological site, very different from Teotihuacan or the other sites further out on the Yucatan. Take note of the difference in architecture and be sure to pay a visit to the red queen while you’re there! Keep your eyes peeled, you’re likely to see toucans in the treetops if you pay attention, and perhaps even some howler monkeys! There are loads of little hostels and family run hotels in and around Palenque. Some of the most interesting seem to be on the road out to the ruin site. Stop in and out at several to find the best price and services.

Quick search for hotels in Palenque:

If you want to save money on your hotel you can hop a night bus from Palenque to Merida, or you can fly instead, the choice is yours! 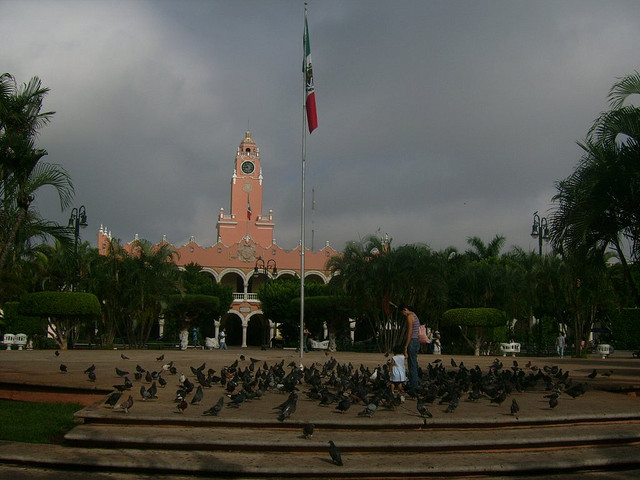 Merida is the capital city of the state of Yucatan. Nicknamed the “White City” it’s a gem on the Yucatan that is off the well trodden tourist path. Treat yourself and choose a boutique hotel downtown, preferably one with a swimming pool, Merida is known for its heat most of the year.

Quick search for hotels in Merida:

Relax around town. Wander the large, four block square, two story mercado in the heart of downtown. This is no tourist market, instead it’s where the local people shop. Be prepared to get lost and wander for at least a couple of hours. You’ll see things here you won’t see anywhere else. Try the hot pink and white layered coconut jelly that miraculously doesn’t melt in the heat. Visit the zocalo and buy a pastry at the bakery on the corner. Feed the pigeons. Slow the pace. You’ve seen a lot in the past week! When the heat gets to be too much duck into the Cathedral and if you’re lucky you’ll hear a mass sung in Mayan. It’s the oldest church on the continent and was built as a fortress as well as a house of worship. Check out the gun slits instead of windows! Visit the Palacio Gobierno across the square and peruse the stunning artwork on the second floor. The murals of the history of the Yucatan are captivating. Particularly the one of the man being tortured to death in the square you’re standing on. If you’re lucky enough to be in town on a Friday or Saturday you definitely want to hit the zocalo after dark. Merida puts on the best weekly street party on the peninsula, and this is the real deal, not a tourist affair!

Time is getting short and choices have to be made! You can’t see it all, unfortunately. You could go one of two directions: Keep your hotel in the city and take a bus trip out to the little visited ruin site of Uxmal, with it’s rounded pyramid and garden of stone phalluses. Or you could head toward Cancun and make a stop at Chichen Itza, the big one that everyone’s afraid to miss. The choice is yours. Either way, you won’t be disappointed. There are little hotels near the Chichen Itza ruin site, so you won’t have to worry about finding a place to stay. 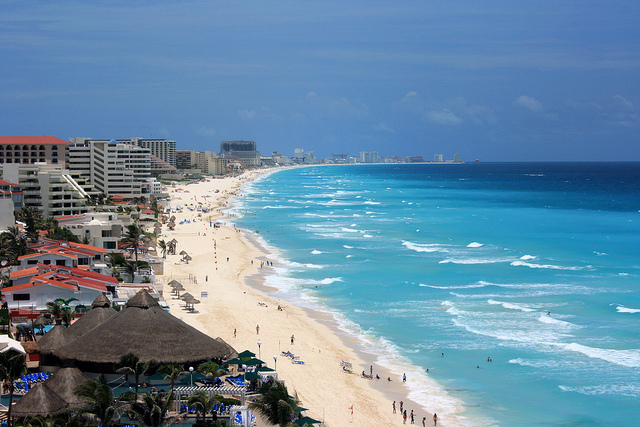 Cancun, finally! You made it! An overland journey from Mexico City is a real adventure to be proud of.

Quick search for hotels in Cancun:

Check yourself into a hotel on the beach and rest for a couple of days. Soak up the sun and the sand. Book a snorkeling trip, or go SCUBA diving. Or just hang out at a beach front bar and sip some Coronas and tell your stories to the weekend warriors who are sure to look at you with envy.

If you insist on one last fling then you’ve got a few choices: Xel-ha and X-caret are both fabulous and easily accessible. Xel-ha is an ocean eco-park complete with dolphin swims and a protected bay for snorkeling with some of the biggest specimens of tropical fish you’ve ever seen (there are no predators!) X-caret is an eco-park that blends history and culture with ecological awareness with an amazing nighttime show as icing on the cake. Either way you go, it will be a perfect day. If you choose to spend the day sleeping in a hammock instead, no one will blame you!