Mexico City is officially divided into 16 “Delegaciones” (boroughs) but for the traveler it’s easier to mentality divide it into districts. The majority of historic sites are concentrated in Centro Historico, centered around Plaza de la Constitucion.

This area is totally different than the rest of the city and has a strong Colonial and European feel to it, with narrow cobblestone streets and Colonial architecture. The easiest way to reach Centro Historico is by metro (although it’s always crowded) and the best way to explore the era is on foot.

It’s one of the largest squares in the world and is surrounded by important historical buildings. It has been the center of Mexico City since pre-Hispanic times.

Located in Plaza de la Constitucion, it’s the largest cathedral in the American continent. Its construction took more than 300 years. It’s possible to tour the upper levels and the bell towers (however the tours are only in Spanish).

In its glory years, it was the main temple of the Aztec capital of Tenochtitlan. It was destroyed in 1521 and remains of the temple have been discovered under a portion of modern Mexico City. 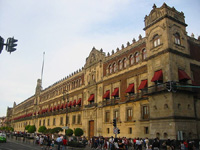 It’s located in Plaza de la Constitucion and is the office of the President of Mexic. Built in 1693, the palace was the residence of the Viceroy of New Spain. The inside walls are painted with scenes from the Mexican history, starting with the pre-Columbian age until the Mexican revolution. It’s free to visit the palace.

It was Mexico’s first skyscraper and has 44 floors. At the 42nd floor you’ll find an observatory (entrance is 50 Pesos). It offers some of the most beautiful views of the city.

It’s one of the oldest buildings in town and was first home to the local nobility.

Definitely one of the most beautiful buildings in the capital, it’s built in European style. Currently it houses the main post office.

Legend has it that the Aztecs found, on this very site, an eagle eating a snake on top of a cactus and that was a divine sign to establish the city of Tenochtitlan. 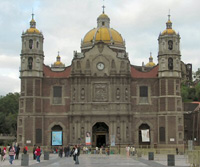 It used to be the head office of the Holly Inquisition and now houses the Museum of Mexican Medicine.

The Catholicism’s holiest place in the Americas, it’s the second most visited church in the world. The basilica contains the shrine which guards shroud of Our Lady of Guadalupe. For a special celebration, visit the Basilica on December 12.