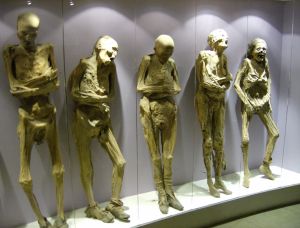 Their haunting faces and hallowed eye sockets will give you nightmares for weeks. Teeth exposed from open mouths, fingers stiffly crooked for eternity, grey skin clinging to protruding hip bones and ribs, shoes still laced on unmoving, shriveled feet… The Mummy Museum in Guanjuato will haunt you long after your return from this picturesque Mexican colonial town nestled in the hills of the highlands. But after strolling the narrow, hilly streets between colorful Spanish colonial era buildings and experiencing Guanajuato’s bustling nightlife, you won’t be sorry you visited this Mexican town (and you’ll probably even like the mummy museum too, even if it is creepy).

A small city located in the highlands northwest of Mexico City, Guanajuato is a beautiful and historic city nestled in a valley between outlying hills. Guanajuato is located in one of the richest silver mining areas of Mexico, and was founded in 1554 when Spanish conquistadors started mining the silver from the hillsides. What remains from this pilfering past is the beautiful fine colonial era Spanish architecture. Another distinct feature of Guanajuato is the network of underground caverns and built to divert the Guanajuato River underneath the city. Today, the tunnels are lit and paved with cobblestones for automobile traffic, carrying most of the city’s car traffic. 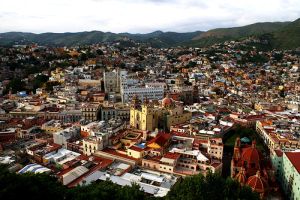 In contemporary times, Guanajuato is a popular tourist destination in Mexico and is home to a major University. Because of the presence of the university, the city has a very active nightlife and a young, student population with many foreign students. A popular way to celebrate the evening in Guanajuato is catching a mariachi band at one of the cafes in the Jardin in the center of town.

Mummy Museum
Guanajuato has catacombs which holds many naturally preserved mummies. In these catacombs about 1 in every 100 bodies experiences natural mummification, this remains somewhat of a mystery. Many think that the unique mixture of minerals in the soil helped to preserve the bodies. During the late 19th century, the town instituted a burial tax, which charged the families of the deceased a “rental fee” for the land where the corpse was buried. When the poorest families were not able to pay the tax, their dead relatives were dug up from their grave and put on display to the public in the “Guanajuato Mummy Museum.” Today the museum holds 111 corpses resting on velvet pillows. This museum still adds corpses today, the latest which were two children added in 1984 when their families were unable to pay the tax.

Expresión en Corto International Film Festival
The largest competitive and prestigious film festival in Latin America takes place in Guanajuato every year during the last week of July. Some films are screened in unusual locations such as the underground river tunnels, the Mummy Museum and the Municipal Graveyard.

El Pipila
A huge, 28-meter tall statue of an independence hero graces the top of San Miguel hill in town and a cable car transports tourists to the top of the hill, which provides beautiful views of the city below.

Mercado Hidalgo
The two-story indoor market sells everything from touristy souvenirs to groceries to clothing. Besides the plethora of wares and goodies inside the market, the building itself is something to see. Brought to Mexico from Belgium in 1910, where it was intended to be a train station, the façade of the building has a tower and is made of pink quarry.