Go to Oaxaca for Day of the Dead Celebrations 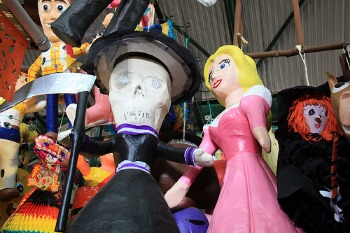 Often when we make travel plans it’s because we’ve seen a picture or heard something about a place that makes us say, “Oooh, I want to go there.” But one thing that some travelers tend to overlook – but that makes an excellent reason to travel to just about anywhere – is a local festival. You might think that a local holiday or festival is a celebration meant just for the residents of a given place, but these festivals can be a great time to see a foreign destination. It’s when that city or country puts on its finery, and in some cases there’s no better time to visit.

In Mexico, one of the local festivals that’s become a relatively popular tourist attraction is the Day of the Dead festival in Oaxaca. It’s too late to get to the festival this year, since it ends today, but that just means you’ve got 12 months to plan to be there next year.

Day of the Dead – or Dia de los Muertos – festivals celebrate the dead in a way that’s more about celebrating life, rather than some ghoulish honoring of “undead” characters like Halloween can be. There are lots of places around the world where Day of the Dead festivals take place, but Oaxaca in southern Mexico is particularly famous for its celebrations. Of course, there are other great reasons to visit Oaxaca, too, so if you want to visit before next year’s Dia de los Muertos celebrations you’ll have plenty to enjoy about the city.

Although Oaxaca isn’t one of the most visited cities in Mexico – that distinction is reserved for beach towns with big resorts – it’s a beautiful colonial city that’s increasingly popular with cultural tourists in the country. Oaxaca is home to a few museums dedicated to local art and history, a couple of beautiful churches, and a nearby notable Zapotec archaeological site. Learn more about what to do in Oaxaca before you go – especially if you’re visiting when the Day of the Dead festivities aren’t going on.

Keep in mind that because Oaxaca’s Day of the Dead celebrations are growing in popularity with travelers in the know you’d be smart to start hunting for Oaxaca travel deals well in advance of your trip – it’s not a huge airport, so finding cheap airfare to Oaxaca could be a bit more challenging than finding cheap fares into bigger hubs like Mexico City.