Getting from San Diego to Tijuana 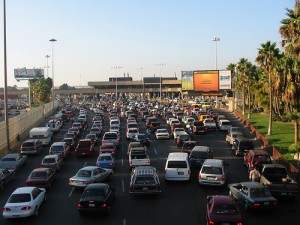 The U. S. Department of State has been issuing traveler alerts for the U.S. citizens living and traveling to Mexico since 2008 and the latest dates from April 2011. Resort areas and tourist destinations generally do not see the levels of drug-related violence and crime which occur in the border regions. Visitors are urged to use common sense and visit only the tourist areas during daylight.

Tijuana , one of the world’s most visited cities, is included in the travel warning. No one says not to visit it, but you should stick with the tourist areas and you can also consider taking a guided tour.

The easiest way to get from San Diego to Tijuana is by San Diego Trolley , often referred to as Tijuana Trolley. Take the Blue Line, which terminates at the border crossing. One-way fare is US$2.50 and the day pass is US$5.

To get to the border, use the pedestrian bridge to get to the other side of the road and go through the turnstile.

To get from the border to Tijuana city center, take one of the buses which leave from the parking lot. Mexicoach runs all the way to the Tourist Terminal on Avenida Revolucion, Rosarito Beach and the Tijuana Bullring. Another option is to the take the local buses once you are on the Mexican side of the border. Just look on the front of the bus.

When you get from Tijuana to San Diego U.S.-bound border crossing is on the opposite side of the highway. Now take the pedestrian bridge and you are in line for border crossing procedures. Once on the United States side, the San Diego Trolley will be straight ahead.

Buses from San Diego to Tijuana

Driving from San Diego to Tijuana

You can rent a car in San Diego and drive along I-5 to the big border parking lots on the U. S. side of the border from Tijuana. That’s where you need to leave the car, if you rented it. Make sure to take the “Last U.S. Exit, Camino de la Plaza” ramp, unless you want to end up driving across the border, which will prove to be a big hassle.

Note:* at the time the article was written