Getting from San Diego to Cabo 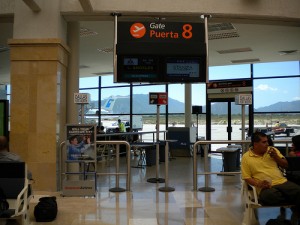 Cabo San Lucas is the jewel of the Baja California peninsula and a favorite vacation destination for the Americans and Canadians. With its superb beaches, a variety of water sports, golfing and snorkeling, Cabo attracts million of vacation goers every year.

Getting from San Diego to any of the cities in Baja California is easy and a very popular choice for those living in the US. Actually, the border crossing between San Ysidro and Tijuana is the busiest in the entire world.

The cheapest and hassle-free way to get from San Diego to Cabo is by plane via Tijuana. Take the bus to Tijuana Airport and then a domestic flight to Cabo. The bus fare is US$12.15* and the single airfare starts at US$62 outside the high season.

Flights from San Diego to Cabo

San Diego International Airport (SAN) is located 3 miles from the central business district of San Diego and 20 miles from the border crossing to Mexico. It is the second busiest single runway commercial airport in the world (London Gatwick is the first) but is not hub for any airline. It is, however, a focus city for Southwest Airlines.

Los Cabos International Airport (SJD) serves Los Cabos area and is the seventh busiest airport in Mexico. It is located outside of San Jose del Cabo and it takes about 30-45 minutes drive to get to Cabo San Lucas from the airport.

Direct flights from San Diego to Cabo are run only by Alaska Airlines. The flight time is 2h 5 min. During the high season (December 2011) expect to pay from US$259 per person for a single ticket , while return flights start at US$522. Outside the high season (March 2012), expect to pay from US$149 for a single ticket and from US$412 return. Alternatively, you can opt for connecting flights, which start at US$199 one way on US Airways, if you want to fly in December 2011, but the travel time increases to 4h 20 min.

Buses from San Diego to Cabo 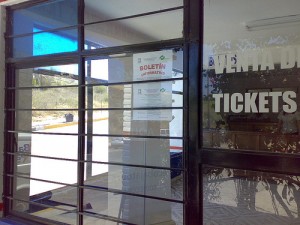 Taking the bus to complete this journey is quite a hassle and here are the reasons why. First, you need to take the Greyhound bus to Tijuana . It takes 1 hour and fares start at US$12.15 (web fare only). There are buses departing San Diego hourly.

>>read more about Getting from San Diego to Tijuana

From Tijuana, take another bus to La Paz, the state’s capital. ABC Bus offers services but it’s not easy to figure things out on their website (Spanish only), so your best bet is to ask at the bus station. From La Paz , take the Aguila bus (also operated by ABC Bus) to Cabo San Lucas.

In total, the journey takes about a day (24 hours).

Driving from San Diego to Cabo

You can rent a car in San Diego and drive all the way to the parking lot before the border crossing. Be careful to take the “Last U.S. Exit, Camino de la Plaza” ramp, unless you want to end up driving across the border, which will prove to be a big hassle.

Should you want to drive all the way to Cabo, you’ll need to drive your own car. The shortest route is 1035 miles via Carr Federal 1/Mexico 1 and the total drive time is about 19 hours. You should consider making several stops along the way.

Alternatively, you can rent another car in Tijuana for the reminder part of the journey.

Note:* at the time the article was written