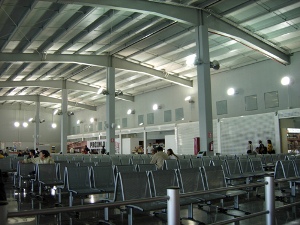 Mexico is a big country and since passenger train service seized operations more than 10 years ago, flying has become the best means of transport within the country.

The two Mexican airlines are Aeromexico and Mexicana.

Both airlines were owned by a government company, until recently; which meant the prices were a bit expensive on certain routes as there was no competition. Since 2006, Mexicana is privately owned. However, since the market has been de-regulated, more and more privately airlines operate in Mexico, opening the road towards competition. But the routes and schedules of the independent airlines tend to be limited, so you might be forced to take one of the national airlines anyway.

Because of how the Mexico’s airline industry is structured, Mexico City is the most important airport in the country, serving the country’s airports. That means point to point travel is not always possible and you will be forced to return to Mexico City in order to fly to another province. However, since the market has started to be de-regulated, more and more point to point flights are possible without having to come back to Mexico City.

Toluca Airport has become an important airport for the low-cost carriers. It’s located at about 45-60 minutes drive from Mexico City. The low-cost carriers provide transfer for the passengers, from the main airport Benito Juarez Airport to Toluca.

A recent agreement between US and Mexico allows low-cost carriers to operate point to point flights from US to major Mexico tourist destinations and business locations.

Check to see if the flight you need to take is covered by a point to point carrier, either based on US or Mexico. The two national companies also offer regional flights, but the prices might be much higher than expected.

Consider driving in Mexico. But since Mexico is a big country, driving will take a long time. So unless you are prepared for that, you are better off spending time in the airports catching your next flight.

You may want to take a bus, but the bus system is not exactly what you are use to in US or Europe. For a fraction of the flight cost you may ride a luxury bus which makes you feel you are in a business class airplane (ok, except the travel time).