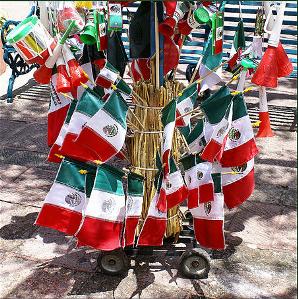 There are many festivals held in Mexico through the year, each having its own importance and significance. And most of them are noisy and colorful, filled with great traditional Mexican food and music. Some of the celebrations have become very popular in the USA as well.

Each year on September 16th, Mexican Independence Day is celebrated all over Mexico. It represents the day when Mexico broke free from the Spanish rule. Weeks before the celebration, flags, banners, hats, and balloons are placed to decorate the streets in the Mexican cities.

One of the most interesting celebrations takes place in Mexico City, in its main square. At about 11 PM on September 15, the shout of Independence (El Grito) is re-enacted. All through the evening, people gather in the square, dressed in traditional Mexican costumes.

By law, the president is required to travel –at least once in his 6 years presidential term- to the historic town of Dolores Hidalgo in the State of Guanajuato to give the shout of independence from the same building where it was first heard

Traditional Mexican food is eaten on this day, such as guacamole, poblano and chiles en nogada. This last dish is created in such a way to display the Mexican flag: green chiles are stuffed with meat, covered in white sauce and sprinkled with pomegranate seeds on top.

El Dia de los Muertos (The Day of the Dead)

Every year, on November 1st and 2nd, Mexico is home to a unique celebration. No, it’s not the Mexican version of Halloween; it’s much more than that. It’s not a scary celebration, it’s one filled with love and great food. The Day of the Dead is one of the most important holidays for Mexicans and one that’s celebrated in the US communities that have a predominant Mexican-American population.

Much of the celebrations take place at the gravesites of the loved ones. The graves are cleaned, decorated with flowers and items that represent what the deceased liked to do. Candles are lit and prayers are chanted. Bells start to ring at 6 PM and continue at 30 second intervals through the night in order to summon the spirits to the celebration. Food prepared for the occasion is eaten in picnic style at the cemetery. It is believed that the souls of the departed come to be with the families all year long.

Upper classes families decorate altars at home to welcome the spirits. These are decorated with items that represent what the deceased like to do and food is also placed at the altar. Often, the altars include the four main elements: earth, wind, fire and water, each represented by different items (i.e. food for earth, paper for wind, a container of water, lit candles for fire).

>>more information on the Day of the Dead in Mexico

Festivities of Our Lady Guadalupe 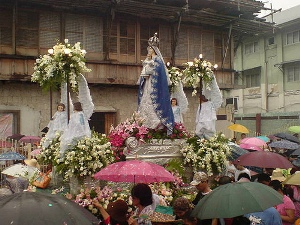 The Christmas celebrations officially begin on December 16, which marks the beginning of the Las Posadas, celebrating the long journey taken by Joseph and Mary to Bethlehem. But before these festivities start, Mexicans celebrate the festivities of Our Lady Guadalupe on December 12.

Thousands of faithful from Mexico (and from the entire world) embark on a pilgrimage to the Basílica of Guadalupe, in Mexico City, home to miraculous image of la Virgen Morena. By evening thousands fill the church and its surroundings, many arriving on their knees to show their faith. A mass is held in the Basilica to honor the Mother of all Mexicans, Our Lady of Guadalupe. Although the biggest festivities are held in Mexico City, masses and festivities are held in each church that bares the name of the virgin.