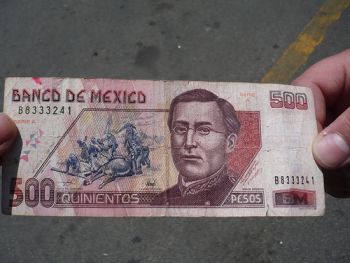 It may not seem like a faltering U.S. economy could positively affect Americans wanting to vacation in Mexico, but the shaky financial markets have actually made Mexico an increasingly desirable travel destination for Americans. Not only have hotels and airlines dropped rates recently in an effort to encourage timid travelers to go on vacation despite the nose-diving Dow, the dollar has also gained value to the Peso, making travel on the ground in Mexico even cheaper than before.

In fact, Reuters reported on November 5, 2008, that Mexico’s peso lost even more value next to the dollar after weak U.S. economic data stoked worries that the economic slow down in the U.S. could push Mexico into a recession.

What does that mean for travelers to Mexico? Your corona is going to cost even less now. In fact, as of today it now takes 12.685 pesos to buy one dollar, a rate favorable to U.S. tourists and the best exchange rate Americans have seen in awhile, though the rate did get to 13 pesos to the dollar earlier in the evening upon news that Mexican interior minister Juan Camilo Muourino had died Tuesday when the small aircraft her was traveling in crashed into rush-hour traffic in Mexico City.

With Americans hurting from tough economic times and leery of spending money on luxury indulgences (like travel), The U.S. southern neighbor is becoming more attractive destination for both its proximity and its falling prices. Despite American’s reluctance to pack their swimsuits and head for a Mexican beach, as the San Francisco Chronicle reported recently, the best time to travel may just be during slow economic times. In fact, if you can scrape together enough cash for a little getaway this fall you could be able to score some unbelievable bargains and huge discounts on everything from package deals to cruises—especially in Mexico. Combine that with a favorable American exchange rate and you could be relaxing in Cabo san Lucas or Cancun for less than you ever imagined.