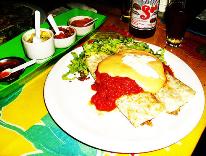 As with many Mexican foods, enchiladas are preferred by foodies all over the world. However, for a taste of real Mexican ones, you should definitely eat them in…Mexico.

The traditional Mexican dish can be made in many ways. They can also be filled with pretty much anything from chicken, beef, and seafood to vegetables and even fruits. The most popular fillings though are meat and cheese.

The traditional sauce is made only from dried red chili peppers soaked and ground into a sauce with other seasonings. The red sauce can also be made from tomatoes and red chilies, while the green sauce is made with tomatillos and green chilies.

Since the ingredients are precooked the enchiladas are put in the oven just to heat through. There are many variants to what enchiladas contain and are garnished with. In many places you’ll find lettuce, olives and cilantro accompanying the dish. Also you can find enchiladas topped with a fried egg. And of course, guacamole is a side dish in many places.

How to make Mexican enchiladas at home

Here’s a Mexican recipe to make the beloved enchiladas. It serves 4-6 persons and it’s quite easy to make. Of course, if you are a vegetarian, you can replace the animal products with soy based ones.

For the enchiladas you will need:

For the sauce you will need:

Firstly make the sauce: peel and wash the tomatillos and in a pot put to boil all sauce ingredients except the cilantro. Bring to boil then drain. In a blender add the boiled ingredients and ½ of the cilantro and blend.

In a pan heat ½ of frying oil and fry each tortilla about 45 sec on each side. Place them on paper towels to remove the excess oil.

In a table spoon of oil, fry the sauce for 3 minutes.

Dip the tortillas in the sauce, one at a time. Fill with the meat and fold in half. Put each enchilada in the casserole and on top of the enchiladas, poor a bit of sauce, add the cheese and some onion. Put in the oven for about 10 min (or until the cheese melted) and garnish topped with cilantro and sour cream. Serve with lettuce.