Day of the Dead in Mexico – A Celebration of Life 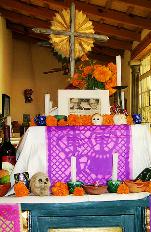 The Day of the Dead is celebrated in Mexico and in the Mexican communities in the United States and Canada. The holiday is not the Mexican version of Halloween and neither is a sad celebration. It is a chance for families to gather to remember and pray for their deceased loved ones.

The celebration includes altars, which comprises the four main elements of nature: earth, wind, water, and fire. Earth is represented by crop as the Mexicans believe that the souls are fed by the smell of food. Wind is represented by a moving object, such as tissue paper. Water is always placed in a container so the soul can drink after the journey to the altar. Fire is represented by a candle. The altars are decorated with sugar skulls, marigolds, and other favorite food of the deceased.

Mexicans also visit the cemeteries, bringing food to the gravesites and spending time there in the presence of the family, friends and the souls of the deceased.

Scholars found that the origin of the modern celebration dates to the indigenous observances which are thousands of years old , and to an Aztec festival dedicated to a goddess Mictecacihuatl (who is the “Lady of the Dead”). Similar rituals date back 2500-3000 years while during the pre-Hispanic era, it was common to display skulls during rituals to symbolize the death and re-birth. In the Aztec calendar the festivities took place in the beginning of August (9th month of the calendar) and were dedicated to the goddess Mictecacihuatl.

Mexicans believe that it’s easier for the souls of the departed to visit the living on November 1. All the preparations are intended to encourage the souls to visit. 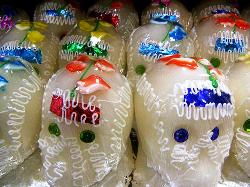 A common symbol of the celebrations is the skull. Sugar skulls have the name of the recipient inscribed on the forehead. They can be given as gift both to the dead and to the living.

Pan de muerto , which is a sweet egg bread , is based in various forms, some of the most common being a rabbit or a skull.

Both the symbols and traditions vary greatly from region to region. Also in many parts of the country the deceased children are honored differently than the adults.

Similar celebrations all over the world

In many countries with Roman Catholic heritage, the deceased are honored on November 1 (The Day of All Saints). In European countries such as Hungary , Poland, Austria, Germany, Romania and Norway, candles are lit at the gravesites and the relatives gather to pay homage to the deceased.

In the United States, many Mexican communities celebrate the day very similar to what Mexicans do. But the traditions often mix with the Hollywood hip and become processions of colorful dancers and music.

In Brazil, the Day of the Dead is celebrated on November 2 when people go to the cemeteries with flowers and candles to honor the deceased.