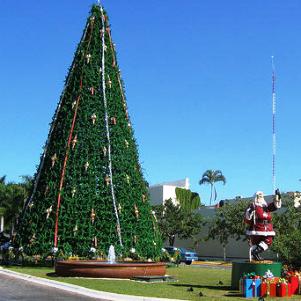 Being mainly a Roman Catholic country, the Christmas Traditions in Mexico are linked to religion and celebrate the birth of Jesus. Nativity scenes, reenactments of Biblical moments and carol singing fill the nine nights before Christmas.

Mexicans start celebrating Christmas on December 16. They revere the Nativity by recreating the scenes during Las Posadas. They are an enactment of St. Joseph and Virgin Mary’s search for lodging. Each family will schedule a night when they’ll host a Posada in their home, starting from December 16 and ending on Noche Buena (December 24).

Each home will have Nativity scene. The children represent Los Peregrinos who are asking for lodging. The children carry small statues of St. Joseph and Virgin Mary. As part of the tradition Los Peregrinos will ask for lodging at three houses but only one will allow them in; the house where the Posada will be held that night. Once inside, the group goes to the Nativity scene to pray the Rosary, a Roman Catholic prayer. They also sing traditional songs. After the prayers and the singing, the children are given Pinata, filled with peanuts, oranges and other treats.

Many Mexican families attend the Christmas Mass (Misa de Noche Buena) at midnight. This is very common in all Roman Catholic countries and totally different from the commercial Christmas Americans live. After the Mass everybody goes to their homes to have dinner with the family.

The Shepherds Plays are staged during the holidays both by amateur and professional groups. Their history goes back to the time when the Roman Catholics taught doctrine with the help of Biblical stories.

The stories are funny and witty as the shepherds encounter Lucifer on their way, who makes sure everything that can get wrong will go wrong. In the end, everything is fine and the shepherds reach the destination. 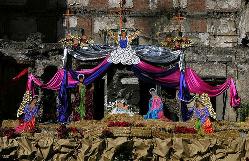 Christmas trees are common in Mexico as well but you’ll find full sized trees only in wealthy homes. Since the trees have to be imported the prices are always high. In many houses you’ll find small branches decorated. La Flor De Noche Buena (Christmas Eve Flower, Poinsettias) should never miss from any house.

By tradition, gifts are not received on Christmas Day. It is not until January 6th (el día de Reyes) that the children are offered gifts. It was on that day (Wise Men Day) that the Magi brought gifts to baby Jesus hence it’s only natural that the children would receive gifts only on this day.

The children put the shoes near the window and the Magi would put the gifts in them, but only if the children were good during the past year.

The day is celebrated during Merienda, a light meal consisting of hot chocolate and the “Rosca de Reyes” made with egg bread and dried fruits.