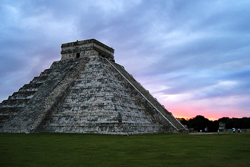 Recently voted as one of “The New 7 Wonder of the World”, the Mayan ruins of Chichen Itza are located about midway between Cancun and Merida.

Best time to visit and admission

Being the most visited site in the Yucatan peninsula, Chichen Itza gets very crowded with tourists. So try to arrive as early as possible, little after 8 AM, when the site opens. You can climb the Pyramid of Kukulkan before it gets too hot (and you’ll be grateful for that!) and you can see the entire site before it gets too crowded.

Ideally you should allow 2 days to visit the entire site but if you are in a hurry it’s possible to visit the ruins during a single day (and eve as part of a day trip from Cancun).

Admission costs around US$10 per person. If you want to watch the sound and light show you’ll pay about US$4 per person (and US$3 if you want the headphones to hear the commentary in English).

Although one of the most widely studied Mayan ruin complex, its history is still a mystery for archeologists. There are many contradictory theories and legends linked to this city. It’s clear though that Mayan community lived here between 700AD and 900AD and it built the majority of the structures. However, the main buildings in the complex – Pyramid of Kukulkan, the Temple of the Warriors and the Ball Court – are Toltec in design and influence. One theory says that the Toltecs invaded Chichen Itza and hence imposed their style upon the new buildings. Other theories suggest that the capital of Toltecs was under Mayan influence, which resulted in a transfer of styles between the two cultures.

The Pyramid of Kukulkan

The structure stands at 79 ft/24 m and two of its sides have been completely restored. Each side has 91 steps and adding the platform at the top, there are 365 steps in total, one for every day of the year. On spring and autumn equinox the shadow of the sun playing on the stairs causes the illusion of a snake sliding down the pyramid. The climb to the top is quite hard but definitely worth the view. The temple at the top can be reached via a passage under the northern stairway (the passage is open for public only sometimes so make sure to check at the entrance). Inside there’s the statue a jaguar with jade eyes.

It’s the largest structure of this kind in the entire Mayan world. It was a playing filed for a game which involved a ball that had to be knocked through the hoops in the wall. It was suggested that the game was used either to settle disputes or as an offering to the gods.

These two temples are probably the most inspiring ruins in the complex. The temples are surrounded by massive columns carved with reliefs. The columns go all the way to the jungle, in a part of the complex that hasn’t been restored.