Best Things to Do in Monterrey

Monterrey is the third largest city in Mexico. Although historically an industrial city, travelers will be surprised to find a wealth of historic sites here as well. It is the most modern city in Mexico and the standard of living is the highest in the entire country.

You must know that Monterrey is a huge city and the best way to capture its beauty is to explore each district. Central downtown only has a population of about 1 million while the metropolitan area is home to about 4 million inhabitants.

If you are expecting traditional Mexican architecture and colonial flavor you’d be a bit disappointed. Although the Barrio Antiguo area has that old charm, the rest of the city is modern and filled with contemporary architecture. It’s the city where you’d most likely run into restaurants serving anything but Mexican food and , without a doubt, it’s a very youthful city.

Although the mountain is located close to Guadalupe, it’s been always associated with Monterrey. And tourists don’t forget to explore it while here. If you are athletically inclined, you can check out the trail to the top. It’s quite hard and takes about 3 hours to complete (although it’s just 5.3 km long). See photo top right. 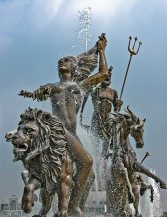 Located in Monterrey’s Zona Rosa, it’s the largest square in Mexico and the second largest in the world. Here you can find one of the most important landmarks of the city: Faro del Comercio (Lighthouse of Commerce). It’s 70 m tall and at night it shoots a green laser light over the city. The Macroplaza is also home to the Palacio de Gobernio and Plaza Zaragoza (which is the old city square between the Cathedral and the original city hall building). Neptune’s Fountain (see below) is also located here.

Across the street from Fiesta Americano hotel you’ll find this marvelous statue of Neptune and some nymphs. It’s located in the Barrio Antiguo area. The anatomic details are impressive and it’s definitely worth your time (and some photos on your card). See photo left.

Very close to Monterrey, just near Villa de Garcia you’ll find this magnificent system of caves. There’s a funicular going all the way up and lately a cable car. The caves are very interesting but all the information is only in Spanish. The caves open at 9 am and close at 5 pm. The caves are closed on Dec 12 (The Feast of the Virgin of Guadalupe).

Inside a commercial glass building, there’s an interesting museum featuring the history of glass and glass industry. You can also buy some stunning pieces at the gift shop located within the museum. The museum is really well rated among travelers but it’s a bit out of the way and you might find that you need to take a taxi to get there (plus taxis are the easiest way to get around Monterrey anyway).