With over 9,000 miles of coastline and all of it tropical, Mexico is the country of choice for beach lovers in North America. Whether you like calm clear waters to snorkel and SCUBA dive, or crashing waves to surf on, or long stretches of quiet sand to walk, you’ll find your pleasure on Mexico’s beaches. 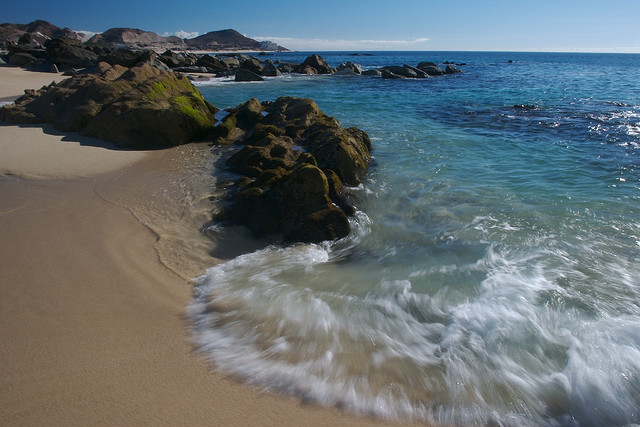 All beaches are federal property in Mexico, meaning that anyone is free to walk them, even if there’s a great big resort built right on the shore. However, the resorts might not take too kindly to beach wanderers using their palapas, hammocks or chairs if you’re not a registered guest. Also important to note, public nudity, even on beaches is illegal in Mexico. It’s not always strictly enforced but you should be aware that the culturally acceptable norm is swimwear on the beach and a cover-up in beachside cafes.

High season for beach goers in Mexico is during the winter months, from November to April the weather is warm, there is little rain and the beaches are beautiful. The off season, during the summer months, is much hotter and rain is more likely to interrupt your plans. As Mexico is a large country, spanning a latitudinal range as great as that of the United States you’ll find beach conditions varying widely throughout the year from north to south. Do your research for your particular destination before you go.

There are three major beach regions within Mexico:

The Baja Peninsula stretches from the northern border with the USA at Tijuana to Cabo San Lucas & La Paz at the southern tip. It is the narrow spit of land that reaches south from the California coastline. Beaches line both sides of the peninsula, on the Pacific side as well as the Gulf side. The vibe in Baja is very different from that of mainland Mexico and is worth a visit for the cultural diversity alone. The beaches are a bonus!

Baja is, in general, less touristed than mainland Mexico and an intrepid traveler with a vehicle of her own will find hundreds of virtually deserted beaches on both sides of the peninsula to explore in solitude. If you’re looking for resorts and well kept beaches look no further than Cabo San Lucas. It is one of the only resort towns in Mexico that has a year round climate close to perfection. No need to limit your visit to high season. If you’re into deep sea fishing, “Marlin Alley” off the coast of Cabo is world renowned for it’s billfish! It’s easy to fly into Cabo from anywhere on the west coast of the USA. From there you can rent a car and explore on your own, or settle in to one of the gorgeous coastline resorts.

If you’re interested in beaches to surf, northern Baja, on the Pacific coast is going to be your best bet. The water is cold in winter but you’ll find some of the best winter surfing waves outside of Hawaii on the coast of Islas Todos Santos, off shore from Ensenada. In the summer, the water is warm enough to ditch the wet suit and waves are consistent. What more could you ask for? A cerveza perhaps? No problemo!

Mexico’s Riviera Maya, as the Caribbean coast has been renamed stretches from Cancun, at the tip of the Yucatan Peninsula to the border with Belize, to the south. Once dotted with quiet fishing villages and hippie camps this stretch of beach is now the most visited in Mexico. If you’re looking for clear blue waters, world class snorkeling and SCUBA diving, water sports of all varieties and a night life that is every bit as spectacular as the beaches, you’re going to love the Riviera Maya. If you’re looking for solitude and untouched beaches to explore alone, you’ll have a harder time finding it on the Caribbean coast.

If you’re visiting the Riviera Maya you’re almost certainly flying into Cancun. From there the buses and tour companies are plentiful, but it might be fun to rent a car and explore the coast on your own. The roads are quite good in this part of Mexico and there is much to be found just off the beaten path.

The beaches at Playa del Carmen, and off shore on the island of Cozumel are some of the very best on the coast. Two ferry companies make 12 runs a day from the dock in Playa del Carmen. It’s about $11.50 USD per person for the trip. Make sure to pack your sunscreen.

When you get sick of the beach hop a bus or rent a car and visit some Mayan ruins. The very best, and most visited are those at the ancient city of Chichen Itza. Spend a night or two in Merida for a cultural balance from Cancun and a glimpse of Mexico off the beach strip and your holiday will be complete. For some less touristed ruins you might try Coba and Uxmal.

Of course the entire west side of the Baja is Pacific coast too, but the mainland Pacific coast stretches the entire length of Mexico to the border with Guatemala. Much of this coast is undeveloped and there are still many little beach front towns that are solidly off the tourist track and not mentioned in the guidebooks just waiting for you to discover them.

The big draws on the Pacific side are Puerto Vallarta and Acapulco. If you’re flying in, it’s likely you’ll land one of these two places.

Puerto Vallarta is famous for it’s Bahia Bandera, the 7th largest bay in the world. If you love wind surfing and water sports this is a great place to visit. Migrating grey whales are a big seasonal draw and the beautiful jungle paradise of Mismaloya balance the beach around Puerto Vallarta.

When you think of Acapulco cliff divers leap to mind, but there is so much more to explore. If you’re a fisherman, don’t miss Acapulco. Sailfish and marlin are so plentiful off shore that some boat captains will bet customers offering a free trip if they don’t catch a fish! The “new” side of Acapulco is exploding, but the charm and culture are still there in the old section. Don’t miss it. The beaches extending up and down the coast from Acapulco are shades of perfect. Head north as far as Zijuatenejo and snorkel the reef off of Playa Manzanillo, or head south for some of the coast’s best surfing.

Puerto Escondido is a paradise for surfers. Playa Zikatela is rated as one of the ten best surfing beaches in the world and it’s not to be missed if you love to catch a wave. The west coast of the state of Oaxaca is as close to an undiscovered paradise as you’re likely to find in Mexico, lined with beaches, as yet, undeveloped. There has been a small problem with banditos in recent years, so travel wisely.

The Gulf coast of Mexico, from the northern border with the USA to Merida, passing through Veracruz, is not as well known for its beaches. There are beaches, of course, but they are no where close to the calibre of those found on the Pacific and Caribbean coasts.

If you’re interested in coconut plantations on the beach that you can camp in, or dirt roads back to narrow, deserted strips of sand, you’ll find those if you really look. There are a few exceptions of course, a few resorts tucked into quiet bays, but in general, if you’re traveling to Mexico for the beach, visit one of the other coasts. If it’s culture you’re looking for, that’s entirely another matter and you’ll find plenty on the Gulf coast; from tiny towns to the danzon mecca of Veracruz.

For additional reviews of specific beaches, check out the Best Beaches in Mexico