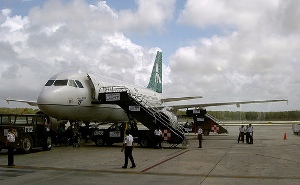 Mexico is a big country and since passenger train service seized operations more than 10 years ago, flying is the preferred means of transport for tourists. Because distances between cities and important tourist sites are large, it’s more efficient to fly rather than drive.

Benito Juarez International Airport, located in Mexico City, is the main gateway to Mexico and the airport where most of the travelers arrive. There are numerous flights to and from major cities around the world.

If you are arriving on an international flight, after you pick your luggage you need to go through Immigration and then Customs. Make sure to have all the forms filled before you land. You are allowed to bring free of taxes: one laptop, one camera, one mp3 player, one tripod, one camcorder and used clothes. Be careful not to lose the forms once they were signed by the customs because you won’t be able to leave the country without them. Be prepared to spend about an hour from the moment you arrive to the moment you’ll leave screening and the airport.

Before leaving the airport make sure to exchange some money at the exchange machines, as those offer great rates at the airport.

To get to the city from the airport, you can either take the authorized taxis or the metro. The taxis are known under the name Transportacion Terrestre and are white and yellow taxis with a black airplane sticker on the doors. Fares range between US$ 5 and US$ 25 depending on where you need to get to. If you don’t carry too much luggage you can take the metro to the city. The ticket costs 2 pesos and the Terminal Aerea station is located next to the Domestic flights terminal.

Cancún International Airport is Mexico’s second busiest airport. The airport is located at about 10 km / 6 miles from the hotels strip. Major airlines link Cancun to important cities from the Americas and from Europe.

There are two licensed companies which offer both shuttle service and private transfer from the airport to the hotels: Gray Line and TTA. Prices are fixed by the airport and are not negotiable.

Other Airports in Mexico